The Sex Manual of The Obedient Wives' Club.

If you haven't heard of the Obedient Wives' Club or Kelab Taat Suami (in Malay) before, read this previous post first.
Well, they know that sex sells to everyone. And to a narrow-minded, mainstream, and (dare I say it) extremist Muslim audience, anything to do with Jew-hating sells. So OWC/KTS combined the two concepts for the title of its latest book, 'Seks Islam, Perangi Yahudi Untuk Kembalikan Seks Islam Kepada Dunia' (lit. Islamic Sex, Fight the Jews to Return Islamic Sex to the World), in addition to holding several workshops in Petaling Jaya, Malaysia. Maybe I'm too ignorant or not anti-Semitic enough, but what has 'Islamic sex' and fighting Jews got to do with each other?

It turns out, not so much. And here's the twist, it turns out that KTS' brand of 'Islamic sex' has more to do with sensationalised idea of sex in Mormonism ('Mormonic sex'?) and cult sex than anything else.

Did I catch your attention? Read on.

The KTS released this controversial book on 12 October 2011, and was immediately publicised in the Malaysian Berita Harian. This Malaysian blogger does a good job of summarising and defending the negative responses received by KTS (also worth reading some other entries from his blog to understand more about the way KTS thinks). Some of the gems in this book include advice for newlyweds, in addition to sexual positions and ways for wives to allow husbands to enjoy '100% and not 10%' of their bodies.

Here's the first few pages from the book: 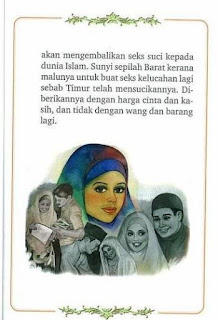 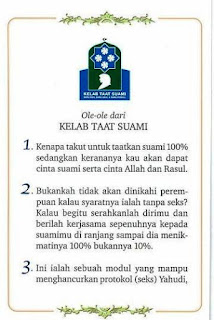 "Tips from Obedient Wives' Club:
And the titillating back cover:
As spiritual people, the capabilities that God has permitted to them (men) is simultaneous conjugal relations with all wives. Whereas if the wife is also spiritual, even better. Flying (going?) anywhere for or while having sex is more enjoyable and easier compared to physical sex. And for that Abuya is processing his wives towards the spiritual (or spirits).


When I read this I immediately thought to this idea of 'celestial sex' in the Book of Mormon that has been sensationalised. Admittedly, this doctrine, while present in older teachings, is not emphasised in mainstream Mormon/Latter Day Saints churches today, along with plural marriage (polygamy) -- possibly because of its unpopularity in its social context. They emphasise the metaphorical, instead of taking literally, ideas of becoming like (and possibly better than) God, having spirit children, and being reunited with their multiple spirit wives in heaven.

KTS promotes physical, mental and spiritual virginity -- on Earth, women are the 'best ornamentation' and enjoyment of men, and in Paradise, they are mythical angelic companions. Not only are women portrayed to be objects for the sole enjoyment of men, but their existence is reduced to being only that!

Abuya's depravity strange religious ideas are seeking justification and acceptance from the public. People in Malaysia have been calling to ban this book, but I say, distribute it so everyone can read it and have a good laugh. And if you can't see how incorrect their teachings are, then you know you have to go and understand the Qur'an a little bit more.

I'm... speechless. Disgusted. And appalled that anyone can consider such ideas valid. I read that Malaysian blogger's defence of the book. While it's true that sex is a natural human need and is permissible when certain criterias are met, it's just the same as eating is a human need and is permissible when certain criterias are met. Why glorify sex as spiritual leadership? There are of course spiritual ways to approach both sex and eating, as with all other aspects of life. Sex between husband and wife may well be not just physical but also spiritual as two souls realise how Allah has brought them together for them to find 'tranquility and affection' in each other, but this is on an equal basis. It's highly intimate and has nothing to do with power of one over the other, or submission of one to the other, but of together, as equal beings, enjoying each other and humbly realising that enjoying sex, like enjoying food, is a pleasure bestowed by Allah. The Malaysian blogger's argument that since men are being inundated by sexual messages and images outside the home, thus their wives have to be the place where they release sexual tension, is just reducing men to weak beings who can't control their sexual urges and who can't read. Because Allah told us, both men and women to lower our gazes. Having obedient wives (cum halal sex workers) is not the solution to overcome prostitution, pornography, etc. Self-control among men is. Men are just coming up with excuses to justify their lack of it.

I agree, and I don't know how this Abuya can come up with blasphemous statements without any evidence, while insulting all men along the way. It takes an uneducated person to accept whatever he says just because he has a turban, a beard, wears kohl and has the maximum number of wives.

It's a sad world where religion is being used to justify any number of depraved things.

As for sex as God's blessing, I would even say that this equal and mutual consent has a lot of wiggle room, as long as you don't transgress God's boundaries.

sorry, i couldn't stop laughing at the "terbang" part. Hahha. what a joke. a rather sad joke.

I know, I can't believe the book intends to be serious though!